Following a suggestion on Flickr  I have put up a trial page for supplier recommendations. I have put mine on as a starting point, please re...

Old web site no longer available the new one is active.

www.achillesyachts.co.uk/ and achillesyacht.blogspot.com/ should now both take you to this site.

If it does not work right now (15:00 UCT Friday 3/12/21) check the URL, if its right try again tomorrow, it could just be a delay in updating the DNS server you are using.

If your "favourites"  link includes a page ID e.g. http://www.achillesyachts.co.uk/pagenn that will not work.

if the http:// prefix is used it will automatically be changed to https://

By Achilles Yacht Owners at Friday, December 03, 2021 No comments:
Email ThisBlogThis!Share to TwitterShare to FacebookShare to Pinterest

Following a suggestion on Flickr I have put up a trial page for supplier recommendations. I have put mine on as a starting point, please review, comment and add your recommendations. If I get a reasonable number from several people I'll leave the page there, if there is little interest I will remove it.

By Achilles Yacht Owners at Wednesday, December 01, 2021 No comments:
Email ThisBlogThis!Share to TwitterShare to FacebookShare to Pinterest

My Achilles was purchased in Poole Yacht Brokers in 2008, came to Portugal by ferry boat via San Sebastian in Spain, the person who bought it then brought it to Portugal towed by a car, the boat had another name "Dolphin UK", but I decided to take it back to its first name "Flying Kipper", I think the names of the boats should not be changed.

In 2013 I bought the boat and for about 2 years I have been doing a total restoration.

The boat has never been on the water since it came from the uk, I'm working to get it to go to this sea of ours in 2022. 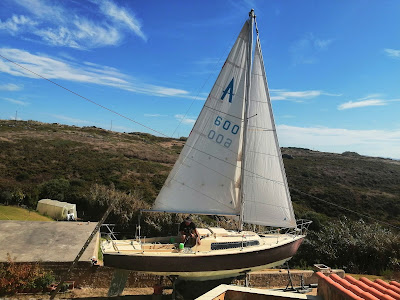 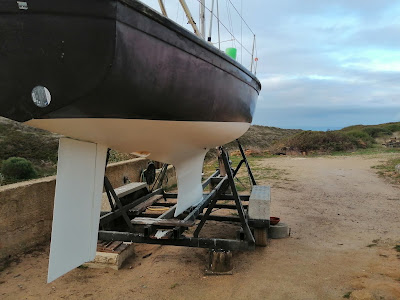 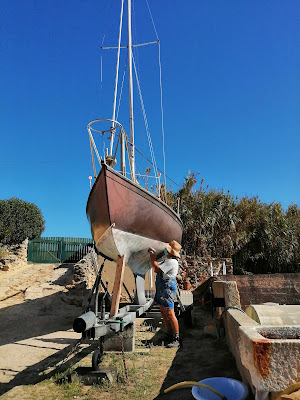 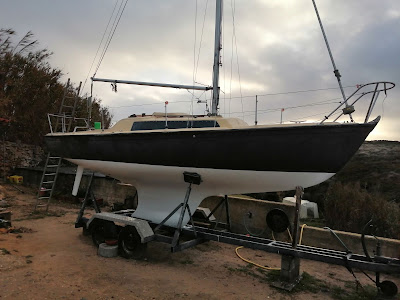 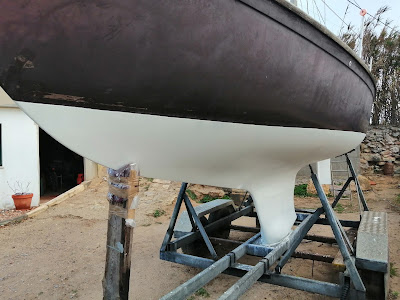 By John Lashbrook at Monday, November 29, 2021 No comments:
Email ThisBlogThis!Share to TwitterShare to FacebookShare to Pinterest
Labels: A24, Maintenance

All change again and now including NI - Ireland

Notice 8: sailing your pleasure craft to and from the UK - GOV.UK (www.gov.uk)

By John Lashbrook at Sunday, November 28, 2021 No comments:
Email ThisBlogThis!Share to TwitterShare to FacebookShare to Pinterest

This may be an unusual problem as I have not found other owners who have experienced it, perhaps they have been lucky, but Sancerre's bronze P bracket was rotting from galvanic action to the extent that small pieces could easily be removed with a screw driver. Fortunately the damage was limited to the front of the lower "hub" section, its structural integrity was not affected and after grinding the degraded material away the cutlass bearing could be refitted with no play in it.

The likely cause was dodgy marina shore power connections (if the marina has not got properly earthed connections your anodes can be eroded by any boat in the area as well as your own), this would not have been helped by the the P bracket not being bonded to the engine. The later can't easily be fixed so after finding the problem I put a small disk anode on each side of the bracket, after just one year this was severely eroded but did its job protecting the bronze, so that is the quick and fairly cheap fix.

For 2021 I installed a galvanic isolator in the mains power system, always a good idea but not something I had got round to doing, I also renewed the "P" bracket anode and to be on the safe side I replaced the wiring for the bilge pump which had a set of connecters that could have rested in bilge water.

Hopefully the problem is now sorted, I shall find out when I get to check the anodes when the boat is lifted but when I dived on the boat in August all of the anodes looked to be in far better shape than I would have expected in previous years.

By John Lashbrook at Saturday, November 27, 2021 No comments:
Email ThisBlogThis!Share to TwitterShare to FacebookShare to Pinterest

The A24 sail number register has now been transferred would A24 owners please review and update us. The old site will close down when the URL has been redirected here.

By Achilles Yacht Owners at Tuesday, November 23, 2021 No comments:
Email ThisBlogThis!Share to TwitterShare to FacebookShare to Pinterest

I believe that all the data, except the A24 sail number register, has been transferred. If anyone sees anything missing please let me know ASAP. The site should go live by the end of the month assuming the URL for the old site can be redirected in a couple of days.

By John Lashbrook at Saturday, November 20, 2021 No comments:
Email ThisBlogThis!Share to TwitterShare to FacebookShare to Pinterest
Older Posts Home
Subscribe to: Posts (Atom) 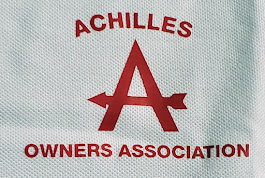